I’ve written before on this blog about my current project with Mozilla’s Connected Devices group: Project Haiku. Last week, after close to 9 months of exploration, prototyping and refinement this project was put on hold indefinitely.

So I wanted to take this opportunity - a brief lull before I get caught up in my next project - to reflect on the work and many ideas that Project Haiku produced. There are several angles to look at it from, so I’ll break it down into separate blog posts. In this post I’ll provide a background of the what, when and why as a simple chronological story of the project from start to finish.

Other posts in this series:

Phase 0: Are we solving the right problem?

Back in March 2016, with Firefox OS winding down and most of that team off exploring the field of IoT and the smart home, Liz proposed a vision for a project that would tackle smart home problems in a way that was more grounded in human experience and recognized the diversity of our requirements from technology and our need to have it reflect our values - both aesthetically and practically. I had been experimenting with ideas like the smart mirror and this human-centric direction resonated with me. A team gathered around her proposal and we started digging.

It quickly became clear that the “smart home” box wasn’t a useful constraint. Connecting things around the home in a way that felt valuable and reflective of the principles we’d identified for this project was proving elusive. So we stepped back and did some design thinking: are we asking the right question? What do people really want from technology in the context of the home? And which people are we talking about? This lead us to a study in which we interviewed a set of teens and retirement-age folks on themes of freedom and independence in the home. You can find more details on the study here

Of the themes that emerged from this study, we chose to focus on that of connecting people. We saw the same needs repeated over and over: people wanted to share moments, to maintain a presence in each others lives. At the same time there was a sense of loss of control and growing obligation from smart phones and social media; being spread too thin. Over the next few months, we built test devices to better understand this problem, and conducted further studies eventually arriving at a simple wearable device that would show real-time status for a small group of friends and family.

We were happy to see that a few other companies had arrived as similar conclusions - taking their own journey to get to this point. Products like Ringly and the Goodnight Lamp embodied some of the same thinking. Our idea for a wearable product was very much informed by Mozilla’s ethos and mission. In this simple device we were going to implement what amounted to a simple wearable web client capable of monitoring a handful of URLs and “displaying” the changing values supplied by those endpoints as visual light patterns and haptic feedback. We would bring the [https://www.mozilla.org/about/manifesto/](values of the web) to the world of connected wearables, and bring both peace of mind and small moments of joy to young people at a time when many in the industry seem intent on exploiting their Fear of Missing Out, and are sometimes cavalier in their handling of privacy and data ownership.

Stumbling and a change in direction

Getting to grips with what it would take to produce this device and re-building momentum lost over the summer break had cost us though. Just as this picture came into focus and we started to take the next steps in the plan, the team was called to account. Our enthusiasm and confidence in the product was not shared by the innovation board. There was some skepticism of our premise - that our audience of teenage girls would want such a thing - despite the research we had done. And there were concerns about our ability to contain the cost and complexity implicit in the small, wearable form-factor. Given the finite resources available to the Connected Devices group and the ambitions of our project relative to the experience and expertise available to us, from the outside it looked like we were heading off into the weeds.

At the same time, another team had concluded a exploratory project with an outside agency and had produced a report echoing many of the needs and values Haiku had identified. They had proposed a (non-mobile) device for the home which would facilitate communication and sharing between friends and family. We decided to put aside the wearable and pick up where this report left off. I’ve written already about some of this work. We produced a “learning prototype” to home in some more on what people wanted from a device like this, and where we could have the most impact. We adopted a new target audience and use case - communication between kids and grandparents - and assessed priorities and features. We did some technical exploration and landed on what was essentially a WebRTC application, running on an embedded Linux device. The WebRTC architecture was a great fit: private and secure by default, with no need to store or pass personal communications through Mozilla’s servers. Each connection is point to point and the very personal and private content implicit in the use cases would always be encrypted. With little to no data to store, an open-source codebase for client and services and a minimum of setup, we could minimize the risk/threat of lock-in for the device owner.

Meanwhile, we had questions. How might this device be used? What kinds of messages would these people want to send? Should we store missed messages? Is the device portable or not? We knocked together another prototype, this time using left-over phones from FxOS days to gather data and feedback from a set of grandparents and grandchildren over a couple of week-long studies.

Fleshing out the idea

The culmination of this work was a product definition that included the user market and use cases, the features and principles, as well as details on what we would need to implement and how. We had landed on a concept for a device and service that would give grandparents and their grandchildren an easy, one-touch experience to share moments using audio or emoji. The child would have a dedicated connected device, explicitly and exclusively paired to an app installed on the grandparent’s phone. We observed a magical thing emerging from the simplicity and directness of the experience: kids were able to carry out “conversations” without any assistance from their parents; they could own their relationship with distant loved ones. This was the real value proposition. Project Haiku wasn’t presenting a technical breakthrough as-such, but taking existing technology and fostering joy, confidence and agency using open standards and the infrastructure of the web. 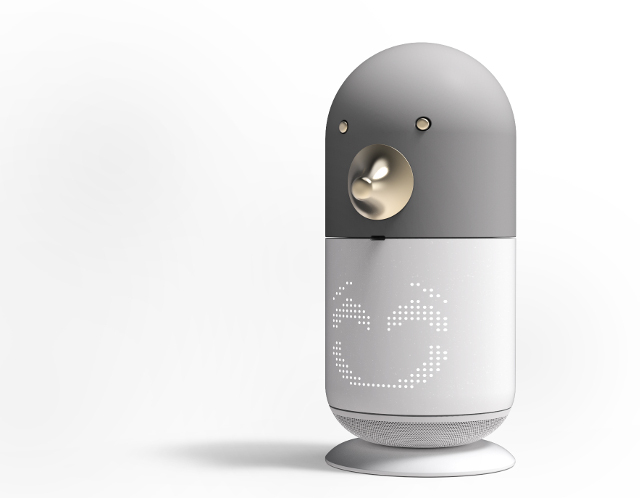 The process we follow in Connected Devices has a “Gate 1” milestone in which for a project to move forward, it should present a clear picture of what the product will be, demonstrate viability and a market fit, and detail what it will take to get there. It is evaluated against these and other criteria including alignment with the Mozilla mission, and alignment with the collective vision for Connected Devices. In December we presented to the board and found out later that week that we had met the criteria and passed Gate 1. However…

The “however” was about resources and priorities: people, money and time. We simply couldn’t pursue each of the products at this time. In the context of the emerging game plan for Connected Devices, Haiku was not a high priority and other projects that were, were hurting for lack of people to work on them. So Project Haiku is on the back-burner. Its possible though unlikely that we’ll be able to revisit it and pick development back up later this year. In the meantime, the best we can do is to ensure that work and findings from this project are well documented so the organization and the community have the opportunity to learn what we learned.

To that end, I’ll be putting my thoughts to paper on this blog on a series of topics which Project Haiku touched. As usual with Mozilla, all our code and documents are publicly available. Please find me on IRC in the #haiku channel (irc.mozilla.com) as sfoster, or through my mozilla or personal email (sfoster at mozilla, sam at sam-i-am.com) if you have any questions. I’m also on twitter etc. as samfosteriam